At every juncture, the activist remained calm and asserted that the case against her is political.

Activist Teesta Setalvad, whose NGO played a crucial role in ensuring that several victims of the 2002 Gujarat riots got justice in courts, was arrested on the evening of June 25. Her arrest came a day after the Supreme Court rejected Zakia Jafri’s plea challenging the SIT’s refusal to file a case against Narendra Modi for his alleged role in the anti-Muslim violence. She and two former Gujarat police officers – R.B. Sreekumar and Sanjiv Bhatt – are accused of misleading the SIT to get innocent persons convicted.

Journalist and filmmaker Rukmini Sen reached Setalvad’s home after she received news that the Gujarat Anti-Terrorism Squad (ATS) had arrived there. This is her account of the entire episode.

I was present at Teesta Setalvad’s house from around 4 pm on June 25. The Gujarat ATS was in her bedroom. Teesta was sitting on her floor surrounded by ATS officers. Her lawyer was reading the FIR. I asked, “Was there a warrant?” Teesta said, “No”. She also said in front of all of the officers, “They pushed me to the wall and held me and hurt me.” She showed me the black bruise on her left upper arm.

She had received a call in the morning.

Teesta said, “I received a call from Noida CISF asking about how many people I had in my security. I told them I don’t answer questions on my security over the phone.”

Teesta said, “I was told the Gujarat ATS will just question me at the Santa Cruz Thana. Then they gradually revealed they will take me to Gujarat.” I asked, was anyone from the Mumbai Police there? Teesta signalled at a few cops in uniform. They were Mumbai Police.

Teesta then asked the ATS officer who had identified himself as Jasmine [Rojiya], to follow procedure. “You have said it’s detention. Not arrest. Then I will go to my Thana and register a complaint that you are kidnapping me without a warrant,” she said.

M.J. Pandey and I, Rukmini Sen, insisted that as it wasn’t an arrest. We were deeply worried about our friend Teesta Setalvad. We will accompany her in her car. After much negotiation, the ATS agreed that we can all go in Teesta’s car. Two ATS officers, who told us they were sub-inspectors, sat in the car.

At Santa Cruz, officer Jasmine, Patel and the lady sub-inspectors tried their best to not let Teesta enter the thana.

They pushed her and intimidated her. Teesta however made her way into the Thana and spoke to the media aloud that they were not letting her register her complaint. And that the Gujarat ATS wasn’t carrying any warrant for arrest. That the arrest/detention was illegal. She gave a written complaint to the Santa Cruze police. The Mumbai police followed all the procedure and took down the names of all the ATS officers who had come there.

It is important to mention that Teesta’s phones were seized without any panchnama at ‘Nirant’, her home in Juhu. 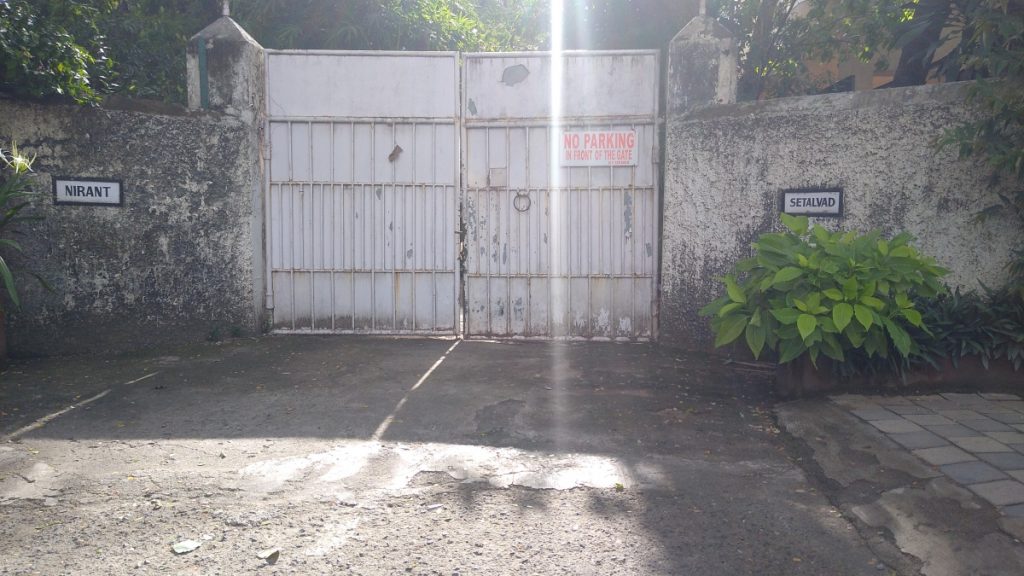 Once we entered Gujarat, we made a stop at a restaurant called Papillon. Teesta asked for her phones. Two were hers and one her colleague’s.

She insisted she would speak with the IO, and not move from the restaurant. It was past midnight by now. There were few people on the road. After much negotiation, ACP Chudasama, the IO from the Gujarat crime branch, came on the phone. She spoke to him and said they can’t take her phones without a panchnama.

The phones were switched off and handed over to our other friend but not to Teesta – with a word that we will not use them.

Teesta told the IO and the officers from the ATS that she will cooperate as she had all this while, but they must follow procedure. They asked her if she does not want to use the phones, why did she want them? She said because that is her right to privacy as a citizen and human rights activist and it was their duty to follow law and procedure. Why would they want to keep her phones if they were not using them? Why was it unusual to ask for one’s phones? Why was it unusual in their eyes to beasked by a citizen to follow procedure?

On June 26, at 6 am we reached Crime Branch, Ahmedabad. One of the officers, whose name I do not know, pushed our friend Pandey and abused Teesta with a “bhosdi nee” while taking all the phones.

Teesta calmly said, ” You are showing your real colours now. You are trying to intimidate me.” All three of us remained calm and asked why was he behaving like that? “What has triggered such behaviour?” This happened in the atrium/ courtyard of the Ahmedabad crime branch.

Teesta and I walked up to the first floor. I was asked to leave but I requested to stay till the IO arrives.

We sat in a room with seven women cops. Teesta asked if R.B. Sreekumar was also there. We got to know he was sleeping in the next room.

In another hour, we saw Sreekumar going to the washroom. Teesta called out his name. He peeped inside. They said hello to each other. She asked about his health. He asked when did she come in. It struck me that he was an old and frail man. Shaken physically, but in spirit strong and smiling.

At 8 am, ACP Chudasama came to office. He met Teesta. She made a verbal complaint, saying her detention was illegal. She also described how an officer pushed her, abused her and seized her phone. She ended her complaint by saying this is a political case. “My arrest is illegal,” she said.

Teesta told ACP Chudasama that she would cooperate in the investigation, as she has always done but all questioning must happen after she is presented in front of a magistrate. That is the correct procedure, she asserted. She also requested the ACP to meet her lawyers when they visit her. That he should tell them the exact courtroom and they must be allowed at the magistrate’s office. I was present in this meeting.

I managed to sit with her till they took her for a COVID-19 test and medical to SV Hospital, Ahmedabad. Teesta managed to show her bruise to the press for the first time there.

She was brought back to the crime branch.

At around 2 pm, she was brought to the metropolitan court, Ahmedabad.

Sreekumar was brought in around the same time. It was a closed-door hearing. No press was allowed. She was constantly surrounded by large teams of the crime branch and Gujarat police. Teesta was calm. At every juncture, she reminded the police, the crime branch officials and the prosecution officials that this is a political case.

She asserted every time she was pushed or pulled or touched that she is not a criminal.

In the evening, the magistrate asked her if she wanted another round of medical tests. She said she did indeed want one. I accompanied her with the magistrate’s permission. She was taken to a civil hospital. A lady doctor examined her. She asked the orthopedic doctor to examine her. X-rays were done. We were told there was no fracture. Teesta thanked every doctor. She was given two strips of painkillers for her hand. She accepted them with thanks. The lady doctor measured her bruise/injury with her fingers and mentioned the same in her medical report. We were neither shown what was written nor were given a copy. They took Teesta’s thumbprint for her identification.

Before the order came in and while we were still in the hospital, I received these two links from a friend.

Just In | #Gujarat Police has set up a SIT headed by #Gujarat ATS DIG Deepan Bhadran to probe the case against activist #TeestaSetalvad and former cops RB Sreekumar and Sanjiv Bhatt, reports @LangaMahesh

The second link was a Zee News report.

This is before the magistrate gave the order. The order first said five days of remand and then six days.

Teesta then was taken back to Crime Branch. I don’t know whether she has a bed to sleep. The rooms where we had sat (two rooms) had a table, some chairs and a bench. Sreekumar had told us he had slept in a similar room.

The order also said she could meet a family member and a lawyer every day.

I came back to Mumbai on the morning of June 27. I texted Javed Anand [Setalvad’s husband], at 7:45 pm to ask how Teesta was doing. This was our exchange.

Me: Hi Javed, How are you? How is Teesta?
Javed: Me ok. Have not been able to see Teesta so far. Still chasing lawyers.
Rukmini: Any new development?
Javed: Chudasama no longer IO. A special SIT appointed to investigate.

With a heavy heart, I quote Martin Neimoller

Rukmini Sen is a journalist and filmmaker.