Donald Trump’s shocking abuse of women is at the center of the election campaign, but Jen Roesch explains that it is symptomatic of the sexism that millions of women face. 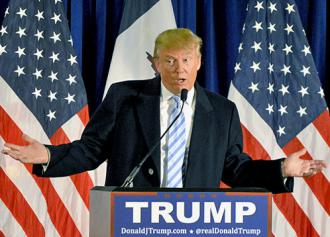 AS MORE women come forward each day with new examples of Donald Trump grabbing, groping and kissing them, it exposes not just Trump’s brutish misogyny but something larger–the reality of persistent and pervasive sexual harassment and abuse faced by millions of women.

So while the mainstream media and the Democratic Party, as well as large sections of Republicans, have chosen to respond with shock at Trump’s supposedly exceptional sexism and beyond-the-pale behavior, for many women, their response is a feeling of recognition.

The weekend after a 2005 video was released of Trump bragging about groping, grabbing and kissing women without their consent, there was a 33 percent increase in traffic to the online National Sexual Assault Hotline. This peaked during the October 9 presidential debate, when there was a backlog of 20 to 30 people in line at one time.

When a Canadian writer posted her own story of sexual assault on Twitter and asked others to respond, she received an average of 50 stories a minute for over 14 hours.

This suggests that this issue is bigger than Donald Trump. In fact, it might explain how someone who clearly engaged in and bragged about this behavior for decades has managed to amass great wealth, attain celebrity status, and enjoy privilege and power without challenge.

BY FOCUSING on Trump and his particularly vile and lurid brand of misogyny, the media have managed to pump out non-stop coverage and “analysis” of each new revelation of harassment and assault while engaging in collective denial about the widespread reality of such abuse–let alone the impact on its victims.

It’s no wonder that so many people turn away in disgust and see this as just another, albeit particularly bad, Washington “sex scandal.”

Anita Hill, who faced a torrent of abuse when she revealed that Supreme Court Justice Clarence Thomas had sexually harassed her, put it well:

Missing from the conversation this weekend, which focused almost exclusively on the character of the offender, was concern about the victims of sexual violence. At virtually every dinner table this weekend, people talked about what should happen to Donald Trump’s political ambitions. But little consideration was given to what impact the brutish behavior he claimed to have had on the women he victimized.

The experience of Rachel Crooks, who told reporters that Trump kissed her without her consent while she was working as a secretary in one of his buildings, gives a glimpse into what that impact is. The New York Times reports that she returned home to her boyfriend of the time and broke down crying:

“I asked, ‘How was your day?'” [Clint Hackenburg, Crooks’ boyfriend] recalled. “She paused for a second, and then started hysterically crying.”

After Ms. Crooks described her experience with Mr. Trump, she and Mr. Hackenburg discussed what to do.

“I think that what was more upsetting than him kissing her was that she felt like she couldn’t do anything to him because of his position,” he said. “She was 22. She was a secretary. It was her first job out of college. I remember her saying, ‘I can’t do anything to this guy, because he’s Donald Trump.'”

This feeling of violation and powerlessness is something millions of women have experienced. According to the National Women’s Law Center, one in four women reported being sexually harassed at work, and 70 percent say they never reported it.

COVERAGE OF the Trump scandal has tended to unfold around incidents within a fairly narrow and rarified world that the vast majority of us will never be part of: boardrooms where multibillion-dollar deals are signed, beauty pageants, celebrity gossip magazines, Hollywood sets and exclusive nightclubs and parties.

We should be clear: no woman, no matter how rich, famous or otherwise powerful (and many of Trump’s victims were none of these) should be subjected to harassment and abuse.

But the media’s coverage of Trump can make it seem as though this is a problem of an elite few. The use of these exposures as such an obvious electoral ploy can feed the cynicism that so many people justifiably feel right now.

For the Clinton campaign, keeping the focus squarely on Trump has an obvious electoral calculus, but it does nothing to advance what is an urgently needed discussion of women’s inequality. To talk about the reality of sexual harassment and abuse in this country would mean talking about racism, poverty, inequality and all of the other issues that she would rather avoid.

The women who suffer the most from sexual harassment are the ones who are most powerless to do anything about it. Women make up more than 75 percent of the 10 lowest-wage occupations in this country and face particularly high levels of abuse. Nearly half of those women are women of color, and Black women report substantially higher levels of harassment.

Many of these women are the only source of income for their families–41 percent of families are dependent on a woman’s income. This makes it nearly impossible for these women to stand up for themselves or even to move jobs. According to all the reports, the vast majority suffers in silence.

A RECENT Supreme Court decision made it even harder for women to make official complaints by ruling that 3 million low-level supervisors cannot have harassment charges filed against them. Instead, a woman would have to claim that the company failed to protect her from co-worker harassment–a much higher legal hurdle.

But as a brief by the National Women’s Law Center points out, these supervisors have substantial control over the scheduling of shifts, the assignment of duties, requests for time off or sick leave for a child and more. Beyond the desperately needed paycheck, because these women are also the prime caregivers, these are precisely the conditions that affect a woman’s ability to provide for her family’s needs.

Agriculture, a male-dominated industry, is another place where women face rampant levels of harassment and abuse. In one California study, as many as 80 percent of women reported being abused or raped in the fields. Due to the nature of the work, these women face particularly appalling levels of violence, which is often perpetrated by armed men in physically remote locations. Because many of these workers are also undocumented immigrants, speaking up can mean risking deportations and losing one’s children.

While the majority of women are concentrated in low-wage jobs, a smaller number of women in relatively high-paid, male-dominated industries experience even higher rates of harassment and abuse. Eighty-eight percent of women in construction experience some form of sexual harassment while miners experience the highest levels.

The physically dangerous nature of these jobs can combine with harassment in ways that are life-threatening to women. It is these conditions, rather than the sexist assumption that women are too weak or uninterested in this type of work, that help maintain gender segregation that concentrates women in the lowest-paid occupations.

Even when women suffer violence outside of the workplace, it still has repercussions on their work and their ability to provide for themselves and their families. A National Sexual Violence Research Center study found that 50 percent of rape victims lost or were forced to quit their jobs in the year following their rape because of the severity of their reactions. Some 21 percent of women who were abused by an intimate partner lost time from work as a result.

ANITA HILL is right to say that this isn’t about “men behaving badly” or, in this case, one particularly repulsive man behaving particularly badly. It is, or should be, about the ways in which sexism, sexual assault, harassment and violence have cumulative impacts that profoundly affect all aspects of women’s lives.

Such a conversation would have to begin by acknowledging that while Trump may be exceptionally public and explicit in his objectification and degradation of women, the abuse he has committed isn’t at all exceptional. It would also have to address the social conditions in which women experience sexism.

We may be about to elect our first woman president, but conditions for the vast majority of women have worsened. Almost 60 percent of families headed by a single mother live in poverty. The decline in social spending–from the destruction of welfare programs to reductions in food stamps and cutbacks in child care services–have made the situation of women and their children even more precarious.

These economic realities make women more vulnerable to abuse both in the workplace and in intimate relationships. And these conditions are the direct result of a bipartisan commitment to austerity, which Clinton fully embraces.

Similarly, Clinton has defended U.S. immigration policy that has led to the deportation of more than 2 million immigrants in the last eight years. So long as this threat remains in place, migrant women will be subject to much higher levels of sexual violence.

If we really want to challenge the toxic sexism that lurks beneath the surface, and which the exposure of Trump has brought to light, then we need to address the persistent social and economic inequality that women face.

But if one thing has become clear since this story broke, the aim for much of the media and certainly for Hillary Clinton and the Democratic Party hasn’t been exposing or defeating sexual harassment and assault; It’s been about exposing and defeating Donald Trump.

These aren’t the same thing–no matter how much Clinton and the media want us to believe they are.

In fact, perhaps the only thing more sickening than hearing Trump brag about sexual assault is realizing that for Clinton, this is the best thing that could have happened for her campaign. While most women must have watched the first minutes of last week’s debate with a sense of dread and revulsion, Clinton was smiling and confident.

Her reaction is almost impossible to fathom unless you understand that she wanted this misogynist and racist to rise to the top of the Republican field because there’s nothing better for her campaign than running as “not Trump.”

Women may very well be the margin of victory for the first woman president of the U.S., and a misogynist may well see his hopes for the White House go down in flames over sexual assault. But it feels like we’re still the ones losing–as once again, women’s lives and bodies are treated as nothing more than political pawns.

No matter what happens on November, it’s been made all the more clear that we live in a deeply sexist society–and it will be up to women and men to build a movement to challenge that.