Amidst a virtual media blackout at the happenings on the JNU campus, an ugly incident involving an undergraduate Muslim student of the prestigious central university points to grave allegations of communal profiling and targeting, with the administration playing silent spectator 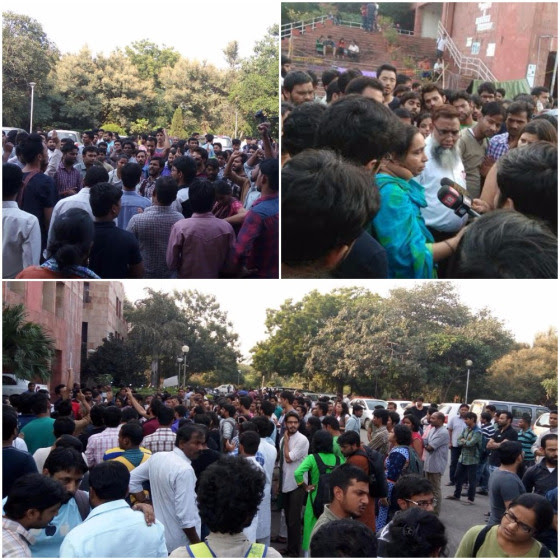 Around 500 students assembled at Ganga Dhaba last night in response to the call by the Jawaharlal Nehru Students Union (JNUSU) for a protest march to Vasant Kunj Police Station to register a case against the accused in disappearance of Najeeb Ahmad, a student from School of Biotechnology, JNU. Amidst slogans of ‘We want Justice!’ and placards bearing the declaration ‘We are Najeeb’, the march kicked off with a speech by Mohit Pandey, President, JNUSU, who said, ‘The administration is busy protecting the Right, ignoring the fact that a student has been missing for 3 days. Their press release has the same language as the one released by the Akhil Bharatiya Vidyarthi Parishad (ABVP) albeit softer. No action has been taken on their part so far, apart from a meeting that was attended, appallingly, by Saurabh Sharma. We, the students of JNU, will show tonight that we are not dependent on the Sanghi administration. We will file an FIR against ABVP members who attacked Najeeb, ourselves.’

The march reached the police station around 11:20 PM, where the students were asked by Mohit to sign the petition for the FIR. The ACP came out around 11:45 PM to address those assembled. Declaring his utmost respect and sympathies for JNU students, he said, ‘All investigations pertaining to the matter are on-going and we ensure time-bound action on it. Your office bearers have constantly been in touch with me, and in return I have directed a big chunk of my office to work on finding Najeeb.’

He added that he had been apprised of Najeeb’s mental health condition by his brother, Mujeeb, and his roommate, Qasim and investigations pertaining to the violent situation on 14th October were going on as well. ‘It is on the basis of solid evidence with me that I say, we have confirmed that he left the campus on the morning of 15th October in a three-wheeler. With regard to our efforts on the case, and because of sensitivity of the matter, only your office bearers will be debriefed, but on daily basis.’ He refused to entertain questions on action against the accused before the FIR was filed. Thereafter, students stayed back to sign the petition.

Earlier in the afternoon students had collected outside the ad block while the JNUSU office bearers and relatives of Najeeb along with an advocate went inside to meet the VC to ask the administration to intervene in the matter.

The JNUSU pamphlet on the recent episode of  group violence in Mahi- Mandvi hostel reads this:
“This is to inform the student community details about the incident which took place on the night of October 14, 2016 in Mahi-Mandavi hostel. There are concerted efforts to communally polarize the campus and spread rumors about the incident. We feel it is pertinent to report the facts of the incident to dispel this rumour mongering being done by ABVP. Around 11:30 pm, some three students went to the room of Najeeb Ahmed, MSc Biotechnology (first year), Room No 106, Mahi Hostel to campaign for hostel elections.

At this time, there was an alleged scuffle which took place between Najeeb and the others. Hearing noise and commotion, when the residents of Mahi reached Room no 106, they witnessed three students assaulting Najeeb. At this juncture, the residents seeing a group of students hauling and coming towards Room No 106, for security concerns, locked Najeeb in his room.

The G4S security personnel have upon reaching the hostel opened the door. Despite the presence of security personnel, some 10-15 students brutally attacked Najeeb. After the attack, the residents again locked Najeeb in the washroom and blocked the entrance, waiting for the Hostel warden to reach.

As the senior warden, Dr Sushil Kumar reached the place, they started moving to the Warden’s office in the ground floor. Despite the presence of the senior warden and G4S security Najeeb was criminally intimidated and communally targeted by the same group of students on the way to the warden’s office. The JNUSU President and other hostel residents who had come to stop the attack were also assaulted by the same 10-15 group of students.

In the Warden’s office, in front of the Senior Warden Dr Sushil Kumar, and the other wardens Dr Somyajit Ray and Dr Arun Srivastava, these group of lumpens threatened Najeeb Ahmed with life and limb. They repeatedly told the warden not to initiate any proceedings and ‘leave Najeeb to them’ and then they would not spare him. They also hurled patriarchal and communal abuses at Najeeb in the presence of the wardens. Despite being present at the site all along the G4S did not collect any video evidence of the assault and the Warden failed to intervene to stop the assaulting students. It is extremely disconcerting that from the morning after the attack, Najeeb Ahmed is missing since 11:00 am, 15/10/2016. A complaint in this regard has been filed in the Vasant Kung Police station by his family members.

There are repeated efforts to terrorize the student community in the Mahi-Mandavi hostel continuously. On October 16, 2016, the day before yesterday, the wardens meeting, held to prepare a report about the incident was repeatedly disturbed by ABVP lumpens led by Saurabh Sharma. There are serious efforts to communalise the issue and concerted efforts to communally polarize the campus where, on the table of the common room “Muslims are Terrorists” and other deeply offensive statements were written in the hostel. It is shocking to see the apathy of the administration which has not taken any concrete steps despite Najeeb Ahmed missing from the campus premises for more than three days now.

Keeping in mind the seriousness of the incident, the repeated attacks thereafter and Najeeb’s missing, the JNUSU demands that all the accused must be punished strictly. The administration must file a formal complaint with the Delhi Police immediately. All the accused have to be declared out of bound from the hostel to ensure a free and fair trial and speedy justice to be delivered without intimidation of the witnesses. The administration has to initiate further steps to ensure the safety of the students and take necessary steps to stop communal polarization of stakeholders of the university.”

Meanwhile the JNUTA, the Teachers’Association has issued a statement strongly condemning the developments.

“JNUTA expresses its deep concern on the recent incidents of the violence in Mahi-Mandavi Hostel and the fact that one student is missing for more than 48 hours. JNUTA also notes the failure of university Administration in handling of this matter and their inability to carry out their responsibility to safeguard the interest of the university and its members. Symptomatic of this is the singling out the missing student as an accused in its Press Release.

JNUTA demands that the administration take pro-active measures to first ensure the safe return of the student by engaging all agencies to locate the missing student and guarantee his safety. Further, a fair enquiry is demanded to identify those guilty of violence, as any violence has no space in the University. The statement has been issued by professor Ajay Patnaik and Dr Bikramaditya Choudhary (President & Secretary of the association)
The statement issued by the JNU administration has been much criticised.

It may be read here 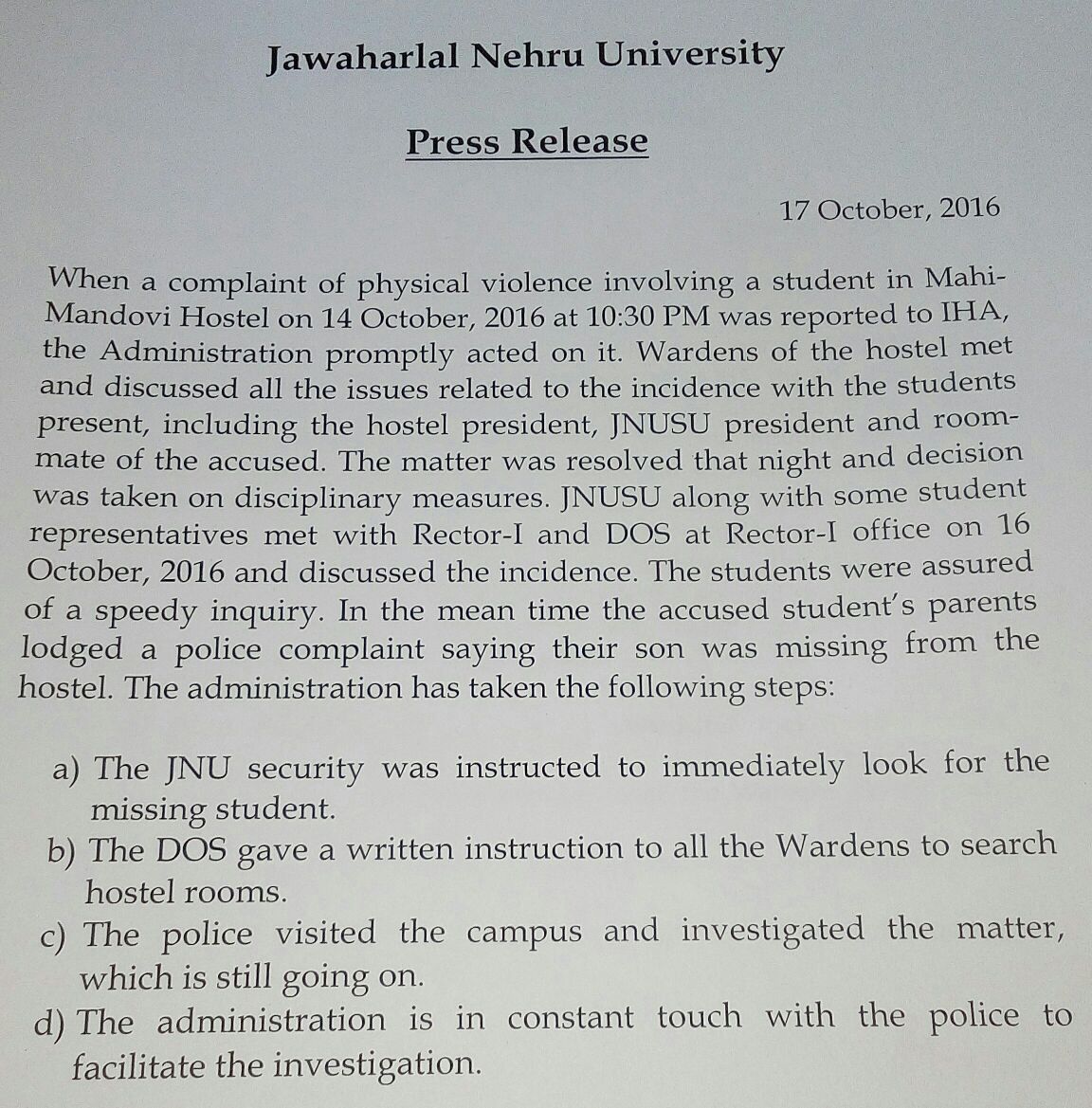