Nisha Thapliyal discusses the background to We Shall Fight, We Shall Win, a new documentary detailing the struggle against education privatization in India. 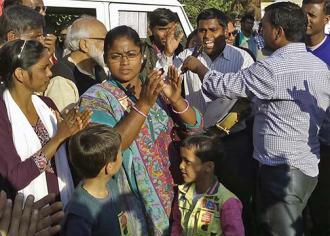 THE ALL India Forum for the Right to Education (AIFRTE) has just released a short documentary about its struggle against the privatization of education in India. The film, titled We Shall Fight, We Shall Win, provides a rare glimpse into grassroots voices for public education in India.

The documentary was largely filmed during a 2014 national march, when AIFRTE activists from all over India undertook a road trip to the central Indian city of Bhopal in the state of Madhya Pradesh. During the month-long journey, activists halted in towns and villages to hold public meetings and popular education events to raise awareness about the neoliberal assault on public education.

The march culminated with a three-day meeting in Bhopal featuring cultural performances of jan geet (people’s songs) and popular theater and speeches by respected public intellectuals and activists. The 54-minute-long documentary is available in English and Hindi and can be watched and shared online via the AIFRTE Campaign YouTube channel.

AIFRTE WAS officially founded in 2009 at a key moment in the history of Indian education–the passage of the 2009 Right to Free and Compulsory Education Act. Despite the name of the legislation, the act has primarily functioned to weaken a historically underfunded and unequal public education system.

We Shall Fight, We Shall Win. Produced by the All India Forum for the Right to Education, 2016. Available on YouTube.

Six years on, the unfunded legislation remains virtually unimplemented. The closure of government primary schools continues (most recently in the wealthy state of Andhra Pradesh) as do efforts to undermine the status of public school teachers. Instead of increased accountability, the act has absolved the government of all responsibility for its resounding failure to provide universal and equitable education for all Indian children.

It is in these conditions that India has become the number-one destination for venture capitalists and philanthro-capitalists who seek to profit from education in countries with struggling public education systems. In India, these currently include vulture capitalist-funded actors such as Omega Schools and Bridge International Academies, funded by Pearson Affordable Learning Funds, and the Indian School Finance Company, funded by Grey Ghost Ventures.

These for-profit providers offer “low-cost” English-language private education to families who believe that learning English will secure the futures of their children. In reality, these for-profit schools have only added another tier to a multi-tiered education system that ensures that poor, low-caste, Adivasi, and Muslim children, mainly girls, continue to be denied equitable and culturally responsive education.

The failed promises of the “low-cost” private school movement have been amply documented by education researchers–see, for example, the work of the Privatization Education Research Initiative (PERI), Education International and Dr. Ravi Kumar of South Asian University and Prachi Srivastava of University of Ottawa, in the specific context of India.)

Since its inception, AIFRTE has worked to develop a national coalition that can sustain local and national resistance to education privatization. It currently includes 45 member organizations and social movements located in 20 out of 29 states in the country.

Members include community-based organizations, not-for-profit nongovernmental organizations, university student and teacher unions and social movements as well as individual educators, public intellectuals, parents, students and concerned citizens. A complete list of member organizations is available at the end of the film.

The goals of this coalition are captured in one of their favored slogans: “Education is not for sale, it is a people’s right.”

From November 2 to December 4, 2014, 2,000 activists from all four corners of India travelled by road to Bhopal–the site of the world’s worst industrial disaster, the deadly Union Carbide gas leak in 1984.

The Shiksha Sangarsh Yatra (Struggle for Education March) sought to raise awareness about key challenges facing the Indian public education system, including: the ongoing commercialization and privatization of public education through foreign direct investment; so-called public-private partnerships and the move to treat higher education as a tradeable commodity under the World Trade Organization-General Agreement on Trade in Services framework; and the destruction of a secular education system through policies and practices that institutionalize prejudice and discrimination based on caste, religion, gender, disability, language and other forms of socio-cultural difference.

As an alternative to privatization, the campaign puts forward a vision of a fully free and state-funded common education system based on constitutional values of democracy, egalitarianism, socialism and secularism. It also called for the medium of instruction in schools to reflect the diversity of languages that constitute Indian society and for Indian languages to be given primary in all sectors of national life.

The 2014 march was also held in solidarity with two other ongoing people’s struggles: the three decades-long struggle for justice and compensation for the people of Bhopal and Northeastern movements to repeal the Armed Forces Special Powers Act (AFSPA) that gives security forces unrestrained powers for search, arrest and use of deadly force against persons suspected of acting against the Indian state.

THE DOCUMENTARY provides a “people’s history” of Indian education–a history that is rarely told in mainstream education discourse.

Viewers will learn about popular struggles for the right to education that have their roots in colonial and pre-colonial education and social reform movements around issues of caste, patriarchy, communalism and class inequality. The documentary also recounts the evolution of post-independence education policy and the influence of the World Bank in the systematic dismantling of public education that began in the eighties.

A range of voices are featured, reflecting the linguistic and cultural diversity of India including rarely represented voices from Adivasi (indigenous) and Dalit communities, as well as from the militarized regions of Kashmir and central and Northeastern India. These voices testify to the exponential growth in educational inequality from the diverse perspectives of students, parents, activists and public intellectuals.

What makes this film unique is that many of these voices draw on rich regional cultural traditions of music, theater and art to express themselves and raise public awareness.

The film makes several specific critiques of the Indian education system. First and foremost, that it is an unequal and segregated education system where upper- and middle-class and -caste children receive more and higher quality educational opportunities because of the purchasing power and social status of their families.

The second critique addresses the dominant “human capital” orientation in Indian education–public and private–which is focused exclusively on producing students who will be productive and obedient workers for the capitalist economy. Activists argue that curriculum and pedagogy fail to inculcate social awareness and responsibility and the traits are necessary for full and direct citizen participation.

Relatedly, the film challenges dominant perceptions among policymakers, media and the public that “private is always better than public.” This perception takes the form of a widespread belief that children who attend English-medium private schools can be assured of securing well-paying and respectable jobs.

The reality, of course, is that after almost a decade of “private schools for the poor,” or so-called low-cost private schools, the evidence shows that these children are in no way able to compete with graduates of elite or high-fee private schools. Furthermore, even English-speaking university graduates remain unemployed and or under-employed in overwhelmingly large numbers.

Last, but not least, the film links the problem of unequal and segregated education with a society deeply stratified by class, caste, gender, religion and class. The scope of injustice is reflected in the lack of access to high-quality universal health care, in widespread poverty, in state-condoned violence against Dalits and religious minorities, in the displacement of Adivasi people from their traditional lands, and consequently, the destruction of their cultures and way of life.

In sum, the film argues that struggles for public education are intrinsically connected to other struggles for economic, social and cultural justice.