When my father passed away last week, my younger sister was with him. The hospital formalities required filling up various forms. A column for the death certificate requires the religion of the deceased. My sister did not hesitate even for a moment to scribble ‘Humanity’. The hospital staff was confused but she insisted and they had to accept it. My other siblings and I loved her for that for that’s what dad would have wanted.
As a little child of six, quizzed at school about religion, I asked him what it is and which is mine. All other children knew theirs and had mocked me for my ignorance. He patiently sat down and explained the concept and then went on to say ‘you can choose whichever you like when you are 18’. My sister and I were super thrilled at having a choice over something which all other kids were burdened with.

Thus we grew up without a religion in a small town where other children, and sometime even adults, would tease us for being rootless without a religion. But the power of being able to choose after having understood our choices, was way bigger than their petty jokes. By the time I was eighteen I realized that I do not need to choose any religion… in fact all are mine. I did not cram up verses from Koran, Bible, Gurugranth Sahib or any such book, but we had access to whichever we wanted to read and understand.

Dad questioned the institutionalization of religion as we see it today. The comparison of ‘mine better than yours’ irked him for he had read them well and could discuss any religion with anyone for hours, straight from the books along with the context of the lives of the initiators of each religion. No wonder then that I grew up often playing with a beautiful white idol of Gautam Buddha in our house. It was a simple sculpture which I loved without even knowing who or what it was. Much later I learnt that dad wanted to name me Siddartha, as he was reading Buddhism around the time I was born.

His burial later, which was done according to Muslim tradition as mom chose that, we called all his friends, acquaintances and neighbors to our house to share his memories. Our invite read, this is ‘not to mourn his death, but to celebrate the life he lived’. We were surprised to see the number of people who came in spite of their own health, age and distances. But before that, I must share a most beautiful thing that mom did as we lifted dad’s body to head for the cemetery. Amidst her sobs she whispered her last words to him softly as both my sisters hugged her, ‘Pardon me if you did not like it this way but I did what I thought was best to offer you my respect’.

At the gathering at home, people shared their memories. Srivastav uncle, a neighbor who had recently moved to another house quite far from dad’s but never broke his contact, shared an incident about dad which we had no clue about. ‘I landed up in the colony at 3.30 am in the night with a truck and laborers to move in’ he said. ‘I knew no one here then. But within minutes a light came on in a house and a man walked out with a bottle of water and glasses to welcome me with the ease of a friend and said, “you must be very tired, have some water and anything else you need… my house is right here”. I was amazed that in this concrete jungle there is at least one person with a heart who can step out to embrace a stranger’ he smiled.

No wonder then that when dad was unwell, Srivastav uncle and many others, including the children from the colony whom he used to teach, kept visiting him regularly and offering us any and every help we may need.

What else could one write in the religion column then, but ‘humanity’ for this man, if at all such a column must exist?

(Parvez Imam is a Medical Doctor by qualification, a musician by instinct and a Film maker and traveler by choice) 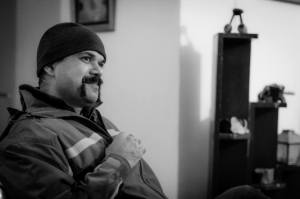 3 thoughts on “This one’s for dad – Parvez Imam”