From the time I was little I remember Gandhi was my ultimate hero. I am not very sure why, but I think a lot of it is to do with the fact that I was in Gandhi house in school. There was no sorting hat (as in Hogwarts) that decided my fate but just I suppose a random teacher’s random choice. A choice that made a difference. From very early on I started becoming aware of what it was to be in Gandhi house. You were always a “loser house”. Tagore house was the winner house. It didn’t help that all my friends were in Tagore house and lost no opportunity to really rub it in.

I suppose somewhere in this growing up phase I realized that the only way I could silence the jeering was by getting to know Gandhi better. So I started reading about Gandhi. Big time. It didn’t take me long to work out that despite all the silvers and bronzes on the sports day, I had actually stuck gold by being in Gandhi house. From then on, every time somebody put Gandhi house down I would get up and start giving lectures on ahimsa, satyagraha and role of Gandhi in the freedom movement. There was a time I even led a non-cooperation movement against the principal of the school (another hero, another story). I don’t know how much it impacted my Tagore house winner friends but I found my hero!

From then on Gandhi always became a sacrosanct topic for me. I remember there was a time when I was growing up when making fun of Gandhi was considered cool. So there would be jokes about his sexuality, his nudity, his food habits, how cleaned his own toilet, his ears and so on and so forth (If you have grown up in India from 60s to 80s you would know what I am talking about). And I remember how deeply it would upset me. I remember as a 12 year old almost coming close to tears when an adult family friend called Gandhi a mad man. I was livid but helpless! Soon my friends and family realized that making fun of Gandhi with me was an absolute no-no. 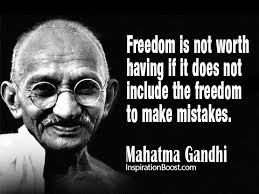 And I have carried that Gandhian flag since then. A few years back when we were living in UK, Guardian carried an article by none other than Salman Rushdie not only criticizing Gandhi but also making extremely disparaging remarks about him. I was so hurt – my favourite newspaper, carrying an article by one of my favourite writers criticizing my hero! Totally not acceptable. So I wrote a long reproachful letter to the newspaper. It was like being back in school again!

And the saga continues. As a child psychologist, as part of the neuro-developmental assessment of the children I ask them questions to assess their general awareness. One of my favourite questions is, “Who is Mahatma Gandhi? Why is he called the father of the nation?” And the answers totally stump me. The best I get are, “he fought the British”, “he defeated the British”, and the weirdest (for the want of a better word) are, “cricketer”, “Bollywood hero”, “businessman”, “king of India” and of course, “he was in Munnabhai” !!

I get disappointed, Very disappointed. Maybe I am expecting too much. They live in the world of Shin Chan, Doremon, Zack & Cody and Hannah Montana. 2nd October is just another holiday, Gandhi is just another statue in the museum. They have no space in their world for heroes like Gandhi.

For all those who do, Happy Gandhi Jayanti!

(Guest Blogger: Dr Shelja Sen is a Child Psychologist and Family Therapist. She is also the co-founder of Children First)