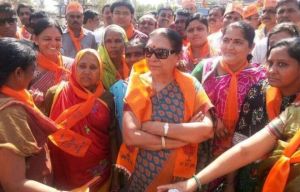 New Delhi: In April this year when the ministry of home affairs (MHA) cancelled registration of nearly 9,000 NGOs for not submitting annual returns from 2009 to 2012, the name of Gramshree Trust, an NGO founded by the current Gujarat chief minister Anandiben Patel back in 1995, was missing in the list.

The second round of crackdown on NGOs in the month of June saw licences of 4,470 such entities cancelled for allegedly violating the Foreign Contribution Regulation Act. This list included a number of top universities, Supreme Court Bar Association and a premier medical institute but not of Gramshree which is now headed by Anar Patel, daughter of the Gujarat chief minister.

However, an RTI activist’s incessant toil against the Gramshree has the MHA now looking into the allegations of irregularities against the trust which according to a response to an application filed by Gujarat-based activist Roshan Shah,has not filed its annual returns since October 24,2011, the day when it was allotted its FCRA registration number.

The RTI application further seeks information on the profits generated by the trust on account of the fact that Gramshree, which employs artisans from Gujarat, has been exporting several of its products that include handicrafts, apparel, home furnishing items and other accessories. MHA in its response to this query wrote, “Being third party information, same cannot be provided without consent of the party. The third party being consulted.”

In August, Shah received another response from the MHA after he enquired about the action taken against Gramshree Trust for allegedly violating FCRA rules.

The response stated that Shah’s grievances have now been sent to the MU section of MHA and sources in the ministry say agencies have been asked to verify charges of irregularities by Gramshree. What remains to be seen whether or not the trust will be taken to task if at all there is a fresh crackdown on NGOs.

“Craftroots, an initiative of Gramshree trust, has participated in exhibition to sell products in the US between July 31, 2015 and August 2, 2015 at NJ EXPO Centre. Ahmedabad charity commissioner’s office informed me that it does not have any account statements of Gramshree Trust or Craftroots. If this is not black money then what is,” Shah remarked.

The ministry of home affairs, however, maintains that the NGOs found guilty of irregularities will not be spared after the ministry completes auditing of accounts of NGOs from 2011-12 to 2013-14.

“We have done scrutiny of accounts of NGOs till 2011-12, the year 2012-13 is in process. It is a tedious work and is still being compiled. We look for habitual offender NGOs and that is why the NGOs who had not submitted even a single year of accounts between 2009-11 were given show cause notices early this year. A similar exercise will be done once we complete auditing of accounts of NGOs from 2011-12 to 2013-14 and any NGO found guilty will not be spared,” an ministry of home affairs official told dna.

“The Gujarat chief minister also serves as the director of Gramshree Women Empowerment and she did not mention this in her affidavit before the Election Commission of India. This means that there is a clear attempt to conceal certain information,” said Shah adding that accounts of this company must be looked into as well.

Anandiben features under the important functionaries in the official website of the state government.Under the section ‘Contribution in the field of service’, where it is mentioned that she is the founder of Gramshree Trust and Director of Gramshree Women Empowerment section 25 company.

While Zaubacorp, a website containing information on companies, shows Anandiben Patel, Anar Jayesh Patel, Meghna Paresh Banker and Vandana Ashok Agarwal as its directors, the ministry of corporate affairs lists the Gramshree Women Empowerment as a private company incorporated on March 23, 2011 with an authorised and paid capital of Rs 1,00,000.

dna repeatedly tried to contact the trust through phone and also emailed a questionnaire seeking information about its management as well as its reaction on the accusations levelled against it. This newspaper did not get any response till the time of filing of this report. dna will publish the NGO’s version whenever it is received.