Genocides, Crimes against Humanity, atrocities, Crony Capitalism, Communalism and Fascism are things to be documented in a Democracy.

Here we go with the First Fact-Sheet of Gujrat Genocide, 2002. The date-line of the happenings is March, 2002.

By 4 p.m. on March 8, 2002. A tarred road replaced the shrine of the grandfather of Urdu poetry, Wali Gujarati, located not more than 10 metres from the Ahmedabad Commissioner of Police PC Pandey’s headquarters. The shrine was torn down by marauding mobs allegedly under the directions of Gujarat revenue minister Late Haren Pandya on the night of March 1. That day, a saffron flag was embedded into the site where the shrine once stood. This flag was removed on the night of March 2. However, a callous government and an unprincipled administration participated in the utter obliteration of this cultural monument when they allowed a tarred road to be constructed over it. On the night of March 3, the 400-year-old mosque owned by the Wakf board and located at Anjali Cinema, was broken down in the presence of state ministers Haren Pandya and Amit Shah. With delibrate cynicism, in many such locations, the Hulladiya Hanuman (riot Hanuman) idol has been installed there; darshans and artis have also been held.

The mosque of Malik Asin (Asas, Imadul Mulk) at Ahmedabad, built in the reign of Sultan Mahmud Begada (1458-1511) has been destroyed. A protected monument built in stone, this structure was destroyed within hours and with military precision, in an operation involving the use of a crane and bulldozers. At around the same time, the mosque of Muhafiz Khan at Ahmedabad was also badly damaged. 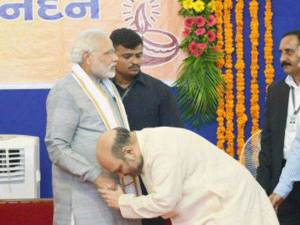 The Hague Convention of 1954 (or the Convention for the Protection of Cultural Property in the Event of Armed Conflict) recognised that the preservation of “cultural heritage is of great importance for all peoples of the world” and that “damage to cultural property belonging to any people whatsoever means damage to the cultural heritage of all mankind.” India is a signatory to this convention.

In 1972, a protocol to this Convention was adopted, which identified “cultural heritage” as, among other things, “monuments, architectural works, works of monumental sculpture and painting, elements or structures of an archaeological nature, inscriptions, cave dwellings and combinations of features, which are of outstanding universal value from the point of view of history, art or science”. Every State that had acceded to the Hague Convention, it held, recognised that “the duty of ensuring the identification, protection, conservation, presentation and transmission to future generations of the cultural and natural heritage situated on its territory, belongs primarily to that State.”

At its General Conference meeting in 2001, UNESCO adopted a resolution that sought to define the circumstances under which an act could be construed as a “crime against the common heritage of humanity.” It reiterated the need for all member-states to accede to and observe the various conventions it had evolved over the years. And it authorised the Director-General of the organisation to formulate for the next session of the General Conference, a “Draft Declaration” which would define the circumstances under which the “Intentional Destruction of Cultural Heritage” could be deemed to have taken place.

The BJP-led government at the Centre is in flagrant default of these conventions and norms of international conduct. The Chief Minister of Gujarat is not simply guilty of crimes against humanity; his men have led assaults (to which the police have turned a blind eye) against the common heritage of humanity.

CC, has through a wide network of activists and writers all over Gujarat, accessed a comprehensive list of no less than 230 shrines—Dargahs and Masjids that were destroyed using bulldozers and cranes in just 72 hours – hours that CM Narendra Modi spent in getting the state ‘under control.’ Born in Aurangabad in 1667, Wali Gujarati is regarded as the founder of the modern Urdu poem. He travelled widely and was also known as Wali Aurangabadi or Wali Dakhani. Ironically, he was a frequent traveller to Gujarat and wrote lovingly of its centres, especially Surat. He died in Ahmedabad in 1707, on one of numerous visits to the city. Then, the people of this region, Gujarat, subscribing to a richer and inclusive worldview, built a tomb for him in Ahmedabad and proudly laid claim to his legacy by bestowing upon him the title of Wali Gujarati. (From the Sahmat statement released on April 8.)

Among the other shrines destroyed is the tomb of Ustad Faiyaz Khan in Vadodara, which was attacked and wreathed in burning tyres in early March. Extensive damage has been inflicted on the façade of the structure commemorating a man who the erstwhile ruling dynasty of Varodara declared in 1912, was the greatest singer in the realm.

Apart from the scale and brutality of the destruction itself, the publicised reactions of members of the saffron brigade reveal a trained cadre and a deeply entrenched hate-driven mindset. One such Paresh Patel told the media, “Our Hanuman cannot be kept here without sanctifying the atmosphere. So puja is a must.” “We razed the masjid day before yesterday and today we are here to ‘purify’ the place so that Hulladiya Hanuman can bless his devotees here peacefully.” Boasting that he was part of the mob that razed Noorani Masjid, high school dropout Patel says that he wasn’t a staunch Hindu till the Babri Masjid aftermath. “I stayed in Naroda and there we had to go without milk and food for three days. It’s easier to talk of communal harmony sitting in air-conditioned offices but if you experience the Muslim tyranny, you will realise how unsafe they are,” Patel, a father of two, said. Patel said that his children went without milk and kept on crying for food. “I was jobless for days together and it was only Hindus who helped my family out. Now, it becomes my moral duty to do anything and everything for the Hindu cause,” he added. (The Asian Age, March 3, 02.)

·(within 100 m. from the Pratap Nagar Police Training college)

5. Dargah, Near Bakaravadi, Razed to Ground

·(Within 250 mts. from two police chowkies [Shiyapura and Dandia Bazar])

(Less than 150 meters from the police station)

(Within 1 km. from the police station)