I have never been a flag waving,sloganeering , chest thumping Patriot.

My patriotism can be measured by the empathy I feel for the disadvantaged, the anger I feel for the injustices , the disgust I feel for all kinds of Corruption -moral, social & economical, & the disappointment I feel for the apathy of my people towards one’s own Society !! But I celebrate too – the very act of achieving independence on an ethical plane, of establishing & nurturing the spirit of democracy in a deeply feudal society,  the maintenance of national integration in a mind boggling diverse land & a sense of tolerance in an unjustly divided society !! 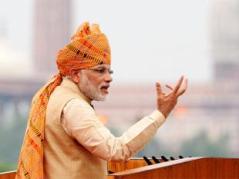 However, this Independence day I have only one feeling – a bitter sense of Irony, that the National flag will be unfurled from the Red Fort by a Man whose root & branch has been in an ORGANIZATION which never participated in the Freedom movement.

Many  members of this organization were British Collaborators & worse of all they never believed in the National flag or the Constitution. For they aspired for an ancient Brahminical order with a saffron Monarchical flag.

And now that they feel they have got a representative saffron Monarch to helm the affairs they are going about robbing ones Freedom – to eat, to wear, to love, to think & to create, hell, just ‘To Be What One Wants To Be’. They have a term for it -‘a good Hindu’. And lest you mention ‘Rights of a Citizen’, they will dub you Anti -National !!
So yah I feel ironical that we are celebrating a ‘Loss of Freedom’….this 15th August. ..

Joy Sengupta is a Cinema, Television and Theater actor and activist. He has been vocal over issues of Secularism and rise of Fascism in India.