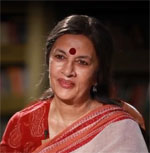 Barely has this government caught its breath that it has started an unrelenting attack on India’s poor said Brinda Karat, CPI-M’s only woman Polit Bureau member in a special interview with Teesta Setalvad, Communalism Combat. The targeted attack on the previous government’s rural employment scheme, MGNREGA by cutting back on its budgetary outlay and the hasty removal of all protection for organised labour (as already demonstrated by the Modi-led NDA II government) will ensure that all protections today available to some sections of the working people, that protects them from contractual employment will disappear. These steps targeted against the vast majority of the Indian people will ensure the increasing relevance of the Left, never mind its current diminishing strength in the Lok Sabha, Karat said. Brinda Karat also spoke of the rampant triumphalism of majority communalism as displayed by the RSS (Rashtriya Swayamsevak Sangh and similar organizations) ever since the elections this May.

The interview, given to social activist and journalist, Teesta Setalvad, is one of a series of special interviews being run by Communalism Combat and HILLELE TV can be viewed at

Defending the stand of the Left in remaining equi-distant from the RSS-backed Bharatiya Janata Party (BJP) and the Indian National Congress, Karat said that the Congress brand of secularism needed to be exposed. She faulted the UPA II of not pushing hard enough a Central law to prevent targeted communal violence to prevent another Gujarat, blamed it for succumbing to rightwing BJP pressure in not implementing the recommendations of the Rangannath Mishra Commission that would have stood to benefit, socio-economically 80 per cent of India’s minorities and worst of all not preventing the arrests of innocent Muslims in the name of combating terror. The road of the BJP to power is littered with the failures of the Congress Party, Karat stated scathingly while recognizing the difference between a government openly backed by the RSS and one run by the Congress. Besides, on the economic front, there was little to choose between the neo-liberal policies of the Congress and the BJP, she said.

Brinda Karat, the first woman member of the Polit Bureau of the Communist Party of India (Marxist) also speaks in this interview about the shocking play of money in India’s electoral politics,  most visible in the recently concluded Parliamentary polls leading to a situation where it was moneyed corporate houses who were now playing a deciding role on who and which party comes to power. The urgent need for electoral reform to ensure a level playing field to those with limited access to money was stressed by her as also the need for a shift to a system of proportional representation to ensure that regional and national players with as much as 20 per cent of votes are not left out in representation in assemblies and Parliament.

Speaking also on the issue of judicial accountability, Karat spoke on the critical issue of independence in judicial appointments. More specifically she was candid at the overt instances of judicial bias within the Courts, a bias that reflected in rulings against women, Dalits and even minorities. Often this has led to the left having to demonstrate and shame judgements and thereafter face contempt of court proceedings, she said. Please view the interview at www.sabrang.com and www.hillele.org and give coverage to the same.

One thought on “Within months of coming to power, the BJP government has started it’s attack on India’s poor: Brinda Karat”