Elizabeth Schulte and Jain Orr report on the outpouring of anger at the Texas Capitol building against Gov. Rick Perry’s ugly attack on women’s reproductive rights. 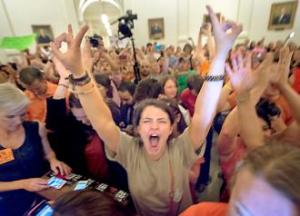 SUPPORTERS OF a women’s right to choose abortion have their eyes glued on Texas as thousands of activists work day and night, inside the state Capitol and on the streets outside, to block one of the most restrictive anti-abortion bills in the country.

After years of seeing restrictions on abortion rights pass in one state after another, abortion rights supporters are taking a stand in Texas–and saying: Enough is enough.

As this article was being completed on Tuesday night, hundreds of women and men had gathered again in Austin to provide testimony and show their support for abortion rights during a second special session of the state legislature called by Gov. Rick Perry in his attempt to push through Senate Bill (SB) 5–which if passed would essentially ban most abortions after the 20th week of pregnancy.

Even though anti-choice protesters, dressed in blue, were given preference to enter the public hearing and aren’t being silenced like the pro-choice side, dressed in orange, abortion rights had gathered in growing growing numbers on Tuesday night.

The day before, more than 10,000 people from across Texas gathered for a rally outside the Capitol in Texas’ largest pro-choice demonstration in decades–and what some are calling the largest demonstration of women in Texas ever. Speakers included Natalie Maines of the Dixie Chicks and actors Connie Britton and Lisa Edelstein.

What you can do

For updates about the struggle at the Texas Capitol and information about getting involved, check out the Stand with Texas Women website.

Join the ISO and other activists for a discussion of how we can fight the attacks on abortion rights at Defend Our Right to Choose! The Women’s Movement and Abortion Rights Today. For more information, e-mail isofeminists.austin@gmail.com
.

People have been pushed to the brink by constant assaults on their lives, and they feel it’s time to fight back. They feel emboldened by the activism around these bills, but I also think there’s a sense of having little to lose and everything to win back.

THE ORGANIZING has been almost nonstop for more than week, since Perry began this latest battle in the war on women’s right to choose. The Republican governor and failed presidential candidate ordered a special legislative session to hear SB5–also known as House Bill (HB) 2–after the legislation failed to pass during the regular legislative session that ended in May.

On June 21, pro-choice Texas mobilized, with hundreds of women showing up to the Capitol building to take part in a “people’s filibuster,” providing hours of personal testimony about the need for unrestricted access to abortion. Testimony was cut off at 3:30 a.m., with hundreds of women still waiting to speak. The House vote to send the bill along was taken in a back room.

Two days later, 2,000 protesters, many dressed in orange, continued the protests, flooding the gallery of the legislature to keep a constant watch on lawmakers.

On June 25, the bill returned to the state Senate, with a deadline of that night to pass the legislation. Pro-choice state Sen. Wendy Davis carried out an 11-hour filibuster against the bill, dring which she unable to lean, sit, drink water, eat, go to the bathroom or speak to anything deemed off-topic. Thousands of people around the country sat glued to their computers as the filibuster was live-streamed via the Texas Tribune–watching as she fended off Republicans trying to silence her.

With just an hour to go, Republicans managed to shut down Davis’ filibuster. But pro-choice protesters, now numbering in the thousands, took up the baton, breaking out in chants of “We won’t go back!” The Senate gallery erupted in chaos, and despite attempts on the part of Republicans and some Democrats to shush the crowd, the demonstrators would not be silenced.

When it became apparent that lawmakers couldn’t vote because they couldn’t hear, tweets circulated among the gallery to continue to make as much noise as possible. Now everyone–including some National Organization for Women (NOW) and Planned Parenthood organizers who had earlier tried to quiet the crowd–joined in chants of “Kill the bill!” and “Shut it down!”

Wendy Davis had a different interpretation. “Today was democracy in action,” she told protesters outside the Capitol. “You all are the voices we were speaking for from the floor.”

So Perry’s stunt failed in the first special legislative session. But the determined Republican reactionary called for another special session the very next day. Pro-choice activists are mobilizing again this week for what is proving to be a fierce and determined fight against a stubborn enemy that is unaccustomed to being challenged.

The stakes are high for Texas women–and women around the country. If it goes through, SB5 would ban abortions after 20 weeks of gestation. This poses a direct challenge to the ruling in the 1973 Supreme Court decision Roe v. Wade, which drew the line at 24 weeks for fetal viability.

The Texas bill would also require abortion providers to have admitting privileges at a hospital within 30 miles of where the abortion is performed. In the case of a medical abortion, the provider must have a follow-up visit with the patient within 14 days.

Even more damning, however, is the requirement that abortion-providing facilities meet regulations for ambulatory surgical centers. Only five abortion clinics in the state of Texas currently meet these increased regulations. Given that three are located along the I-35 corridor and the other two are east of it, the bill will effectively deny access to abortion to the western half of the state.

If SB5 passes, a woman in El Paso seeking an abortion will have to travel 600 miles to reach the nearest clinic in San Antonio. This is an attack on poor, rural women who lack the means to travel across the state. Furthermore, no exceptions would be provided to address mental health, rape or incest.

Texas Republicans claim that SB5 is designed to protect women by strengthening safety regulations. They say the “abortion industry” doesn’t want to spend the extra money it would take to bring the clinics up to the proposed standards.

But the real danger to women is SB5 itself, because it makes it nearly impossible for many women, especially poor and rural women, to access the safe abortion services they need.

IN STATE after state, anti-choice Republicans have run roughshod over women’s right to safe and legal abortion. But in Texas, pro-choice activists are showing how to take a stand.

The outpouring of anger against Rick Perry’s full-frontal assault on women’s right to abortion is convincing organizations that in the past took a less confrontational route to adopt a more uncompromising–and louder–stance. As Feyh said:

The mainstream organizations–Planned Parenthood, NARAL, NOW and others–have been slogging away since the beginning. They’ve seen defeat after defeat, and I think they, too, are tapped into the mood of frustration and anger that has taken hold. While in many ways they have been limited by their strategies, they see the writing on the wall and feel the energy of their rank-and-file members.

It’s becoming clear that these organizations’ single-minded focus on commonly accepted strategies like relying on Democratic legislators to do the right thing can’t come close to the power that is being demonstrated inside and outside the Texas Capitol, as pro-choice women and men make their voices heard. It was their outrage that compelled Democratic legislators to take a stand, and it was their protests that stopped SB5 the first time. According to Feyh:

The Democrats have regained so much credibility from Davis’ heroic filibuster. That kind of thing is what Democrats should be doing all the time. Fighting. The next time a Democratic politician tells you their hands are tied, tell them to look at Wendy Davis. And it means something when up to 10,000 people show up in support. At the same time, they were emboldened to fight precisely because thousands of Texas women were at the Capitol, and thousands more were watching.

Perry and the Republicans have more time to push through their attack this time. But the fight isn’t over–now that activists have provided an example of how you beat back the right wing: You take them head on. As Feyh said:

We are staying tuned to the ins and outs of the legislative session. But this fight has to be broader than what goes on at the Capitol. We need to start a conversation now about where our movement is–what we need to do, regardless of how these bills go down, to win back all we have already lost. We need to build, with all the organizations and unaffiliated people on the ground, a fighting movement that can win abortion rights in Texas once and for all.

The University of Texas has a slogan: “What happens here changes the world.” And that’s usually for the worse, as Texas is a testing ground for all kinds of backward legislation. We’re trying to make a change for the better: we hope the Texas fightback grow and spreads.

Holly Lewis contributed to this article.