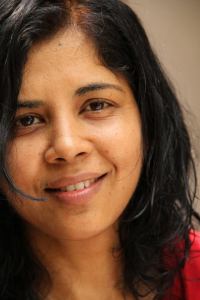 I can run in them, dance in them, walk for miles in them! It’s a matter of pride for many women that they can carry themselves in heels with poise and ease. An epitome of glamour, Carrie Bradshaw in Sex and the City advocates heels as an accessory no woman can do without. Heels, she conveys to us through various episodes, are essential for women to feel good about themselves, to express there femininity, to feel confident, powerful. A feminist choice, almost!

Whenever I expressed my discomfort with heels, I have been told a number of times by heels loyalists that it’s a matter of practice. It is true that I have seen as many women look amazing in heels as those who look awkward and precariously close to falling facedown with each step. That some people can carry themselves gracefully in heels and some can’t, however, is not the point.

I confess that I own a few pairs of heels myself, even if I can count the number of times I have worn them. And, I have done a pretty good job of balancing myself in them. But my vanity wasn’t enough to overcome my irritation with them. My problem is slightly deeper: It is not just the pain and discomfort of walking on your toes for long periods of time that bothers me but the very idea of heels itself

I often saw smartly dressed women in sharp formal suits, returning back from their corporate offices, get on the London local trains. Nothing unusual about that except that for footwear they would be wearing sneakers or some casual footwear. Look in their bags and you would find a pair of heels resting in there somewhere, the heels they have been wearing all day, the heels that make their legs look long, make their figure more curvaceous, make their overall appearance a mix of smart and sexy. And here is the rub: Why are they sitting in the bag? They carry an extra pair of shoes and change into them as soon as you step out of the office to give your feet relief from the torture of constantly walking as if you are reaching out for something on the upper most shelf. It makes me wonder if heels are meant for human feet to walk in.

Research on heels list out their major harmful effect: heels throw the body out of alignment. The body gets into a particular position when you are tripping, except that when you are tripping you would get your body back straight but with heels you get trapped in that position. So all the body weight concentrates on the balls of your feet, putting them under intense pressure that increases with every inch you add to the heels. The stress caused to the balls of the feet due to regular wearing of heels often leads to a painful condition called metatarsalgia. Further because the toes get into a downward curled position, the muscles of your feet become taut and lose capacity to stretch and straighten for regular heel wearers. Problems like calluses, bunions and even corns are known side effects. The posture that heels force you in puts a lot more pressure on your knees, more than what they are designed to take. Regular heel wearing, therefore, increases the chances of conditions like Ortheoarthiritis and joint damage, significantly. Moreover, heels often are the culprit for unexplained back, shoulder and neck pain that many women experience. That is not surprising because you have to bend your spine in the lower back more to keep your balance while wearing

These are enough reasons to declare heels as unsuitable for human feet, I would think. There is no dearth of articles, online and otherwise, warning against ill-effects of heels but they conclude not by telling you to opt for flats but by advice on how to minimise the harm caused by heels. Among a lot of other helpful tips, one says “limit your walking and standing when wearing high heels”. Yes, heels may not be fit for human feet to walk in but we are talking about women here. It is considered perfectly normal to suggest that all the pain and dangers for women’s long-term health caused due to heels notwithstanding, women should persevere, learn to walk in them gracefully and figure out ways to minimise the injury. Is it because the benefits of heels far outweigh the harm? They make women “walk seductively in short and tipping strides” as an article suggests. And what is a woman if she doesn’t walk seductively in short, tipping strides, eh?

There are suggestions to use special products to help with bunions and calluses, suggestions to treat your feet with massages and warm water treatments to ease the pain after a long day in heels, suggestions to carry extra pair of shoes to relieve your feet when walking to and from home to the place where you must be seen with heels on, and of course instructions to not move much. But wear heels you must. Because they make you fit certain standards of beauty. Any challenge to it is scoffed at as feminist agenda that presumes that feminists have something against women’s natural desire to look attractive. In an age a few consider as post-feminism –an era where we do not need feminism anymore because we have achieved all that the feminists set out to achieve – heels are projected as women’s ability to revel in their femininity, unapologetically, as a sign of a modern, emancipated woman.

Japanese women used to wear small iron shoes to keep their feet bound in because small feet were considered pretty and feminine. But we say: “Oh what cruelty!” Women from a particular tribe in Burma get fitted with neck rings that pushes the clavicle (collor bone) down over time.

The deformity gives the appearance of the women having longer necks. Again to confirm to a certain ideal of beauty, which we would call barbaric. Burqa, which Muslim women use to enclose themselves in when they step out of their house because it confirms to certain ideals of acceptable feminine behaviour. Constraining? Many, as would I, say, “of course!” To me they are obvious examples of what all women are forced to do in order to comply with ideals of womanhood.

Women’s mobility and comfort is seriously compromised because a higher premium is placed on appropriate “womanly” conduct and/or physical attractiveness both, let’s remember, social constructions specific to different times and cultures. How are heels any different from these examples, I would like to know?

Maybe it’s slightly ironical that Sarrah Jessica Parker, the Carrie Bradshaw of Sex and the City, has reportedly been diagnosed with deformities in her feet and has been advised by her doctors to ditch the heels. Of course, she blames them on cheap heels that she had to wear to play a character and not on heels per se. Now that deserves an exclamation point!

3 thoughts on “My Peeve with heels – Dr Zeba Imam”