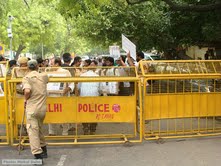 No to Kerry’s pro-GM misadventures!

In solidarity with Edward Snowden. 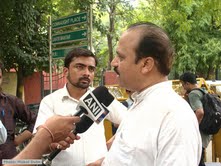 New Delhi: A citizen’s protest was organized here at Jantar Mantar on Monday afternoon opposing the visit of the US Secretary of State, Mr. John Kerry. “We protest against the visit of US Secretary of State John Kerry, who has come here to attend the 4th Annual Strategic Dialogue between India and the United States,” said Kumar Sundaram. Kumar further said, “The United States has been trying to subvert the Nuclear Liability Act, mandated by the Indian parliament, to ensure a liability-free playing field for the US nuclear corporates like Westinghouse and General Electric. Indian people have not forgotten the Bhopal experience where Union Carbide, now Dow Chemicals, got away with only meager compensation for the thousands of victims”.

John Kerry has been supporting Genetically Modified (GM) foods and monstrous corporations like Monsanto. Very recently, he promoted GM at the World Food Prize Foundation which awarded three pro-GM scientists, even as the entire world has rose in opposition to GM-food.

“Pushing India further into the mess created by the US in Afghanistan will be another important agenda during John Kerry’s visit, which must be opposed strongly,” said noted activist Himanshu Kumar adding “this joint protest also raises its voice against the recently unearthed global surveillance by the US where even the allies are under close and constant watch of the NSA”. “We also demand that the US should back off from Syria where a brutal civil war between two armed parties is on and a partisan intervention will only further erode stability and peace,” he further added stating “we firmly believe that a people’s democratic mass movement in Syria can be the only genuine way to oppose the present regime”. 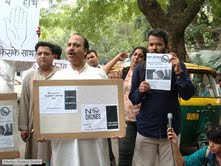 Protesters shouted anti-Kerry, Manmohan slogans and demanded that India should scrap all the arms and nuclear deals with the USA and Israel. They also extended their solidarity with American whistleblower, Edward Snowden and demanded that he must not be harassed. 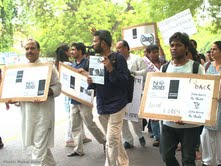 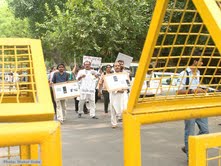