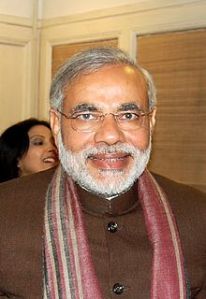 To think of Narendra Modi, the four-term chief minister of Gujarat, as a potential prime minister and the man who might revive the flagging fortunes of the B.J.P., India’s main opposition party, is to ignore the reality of Gujarat.

Most infamously, Modi has been accused of deliberately allowing the sectarian mob violence that killed more than 1,000 people, most of them Muslims, in 2002, soon after he became chief minister. This may have been an extreme episode, but it is consistent with Modi’s divisive and exclusionary approach to governance and his efforts to marginalize Muslims.

The issue surfaced again last week, not on the streets but in staid government offices in Delhi, when Modi and other chief ministers gathered for a meeting of the National Development Council, India’s top policy making body, to discuss pressing economic matters, including Muslim poverty.

The issue has been a source of much debate since a 2006 government report [pdf] on the community’s social, economic and educational status found that it lagged behind the national average on a host of indicators. The findings were especially embarrassing for Gujarat: It claims to lead India in development, but its Muslims generally fare worse than Muslims across the country.

Still, Modi has opposed a national plan from 2007 to set aside 15 percent of development funds for Muslims, claiming it would threaten the “social fabric of the nation.” He also has refused to implement another program that would have provided 53,000 scholarships to Muslim students in Gujarat — a state where 75 percent of school-age Muslims are enrolled in school but only 26 percent go on to finish, while 79 percent of the total school-age population is enrolled and 41 percent go on to finish.

The results of such policies are visible on the ground. Modi’s own constituency of Maninagar, in the state capital of Ahmedabad, is a largely middle-class area. But in Millat Nagar, the heart of Maninagar and home to 20,000 Muslims, Modi’s famed roads give way to streets full of potholes and comfortable homes to broken-down shacks.

When I first visited Millat Nagar in 2007, residents told me that about 75 percent of the houses had no drinking water and that the streetlights had not functioned in a decade. Modi had never visited this area, nor had any other member of his party.

I returned last month during the election campaign for the state assembly. The area hadn’t changed much, except for some work on roads and sewers started by the few Muslims from the area who had been elected on a Congress ticket in municipal elections in 2011. Still, by focusing on everyone but Muslims — who account for only 8 percent of the vote in Maninagar — Modi won 77 percent of the vote in his constituency.

Modi and the B.J.P. also won 47 percent of ballots in all of Gujarat, securing 115 of the 182 seats in the state legislature. Not one of the B.J.P.’s candidates was Muslim, even though almost 10 percent of Gujarat’s population is Muslim.

A comprehensive 2011 report of government data by Abusaleh Shariff, who was chief economist of the National Council of Applied Economic Research for more than 15 years, concludes that Muslims in Gujarat “fare poorly on parameters of poverty, hunger, education and vulnerability on security issues — nowhere benefiting from the feel-good growth story” painted by the current government.

When Modi argues against targeting development specifically at Muslims, it is not because he worries about destroying the social fabric by treating different groups differently. It is because such initiatives imperil his own attempts to isolate Muslims in Gujarat.